My first full day on the continent couldn’t have been more perfect – I woke up to a gorgeous, warm day, not a single cloud in the sky. I had some breakfast, packed up, and set off.

N-260 winding through the canyon floor

As soon as I reached the outskirts of the tiny town I’d stayed in, the N-260 became a non-stop ribbon of left-right-left-right bends, like when you drizzle honey off a spoon, that I could see straight down the middle of. I don’t have a photo of this section of road but think I have some GoPro footage somewhere which I’ll try and dig out at some point and upload to show how epic the roads are.

For the next few hours, I just stuck to the N-260, which is everything you could possibly want in a biking road. It’s in the mountains so the views are incredible, it’s well-surfaced and grippy, hardly any traffic, plenty of little towns with petrol and lunch, and a fantastic mixture of twisty bits and long, fast, sweeping curves around the mountain side. There are some sections which must have been chiseled out of the mountainside itself (maybe using something bigger than a chisel) and parts where the road is at the bottom of a vertical valley created by a river.

In the early afternoon, I realised that my day and a half in the Pyrenees had destroyed my rear tyre. It was completely worn down on the sides as if I’d done 3 days on track – it looked past the legal limit and it was starting to slide. In addition to the time in the Pyrenees, I think I’d done a couple hundred miles on it before the trip and then also had the ride down to Plymouth, but that was in the rain and going steady. Either way, most of the damage had been done since getting off the ferry. I was somewhere near Sort and faced with the dilemma of whether to carry on with my planned route and head into Andorra, or to head towards Barcelona and be sure of finding the right tyre in stock somewhere. In the end, I decided to try my luck in Andorra, so carried on down the N-260 and turned left onto the N-145 at La Seu d’Urgell.

Getting a new rear tyre in Andorra

Andorra is absolutely tiny, and absolutely stunning. Andorra la Vella, the capital, is nestled in a mountain valley with hairpin roads in every direction. It’s a small place and, as I rode in on the main road, I saw a tiny tyre place on the right. I pulled in and saw that it was mostly car tyres with a shelf of only about 6 bikes in total. I told a guy what I needed and, incredibly, one of the tyres they had in was a 190-section Sportsmart, exactly what I needed. Amazing. So, I went to grab something to drink while they got the bike in, up on a stand, whipped the wheel out, changed the tyre, and I was on my way again an hour or so later. 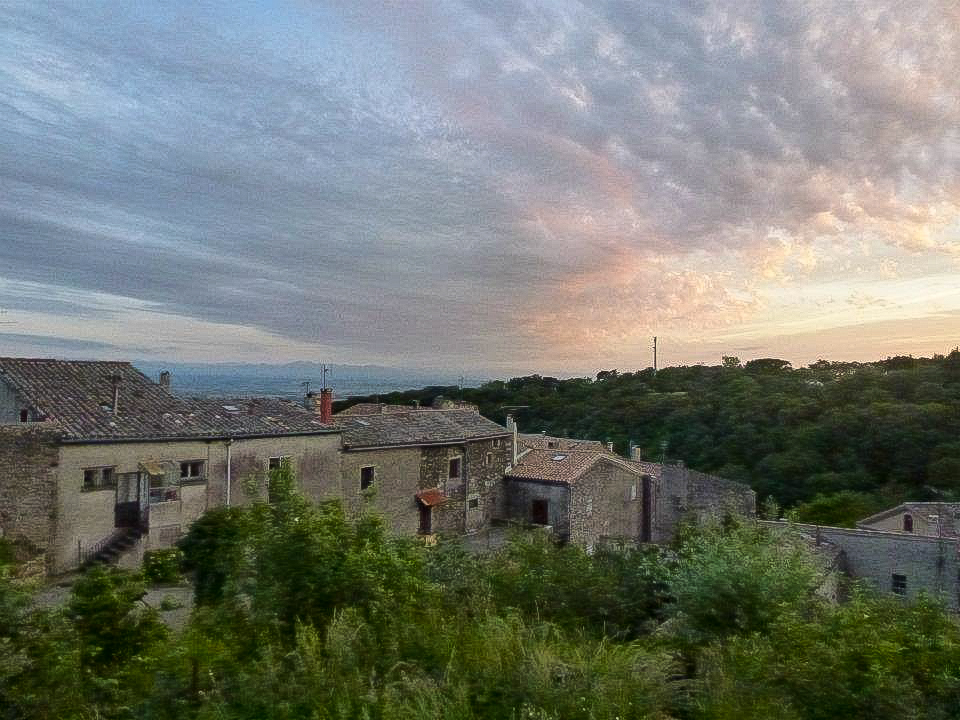 Not long after, I crossed the border into France and started to drop down out of the Pyrenees. The landscape became less mountainous but the roads were still fantastic. More sweepers than hairpins, and lush green countryside instead of steep rocky peaks.

My bike’s home for the night

That evening, I reached a gorgeous, tiny 16th century vineyard village with really old, crumbly buildings around 8pm and found somewhere to stay for the night. The owner kindly let me put my bike in a storage shed/garage in the side of the building. For the life of me, I can’t remember exactly where it was I stayed that night – I know it was roughly a little bit north east of Carcassone but can’t remember its name.

Unfortunately, because I got there so late, there was nowhere around still open for me to get any food. It wasn’t a town with a high street – more a handful of really old buildings in the middle of the countryside. The place I was staying did breakfast and a small food menu earlier in the day but wasn’t a proper restaurant and the kitchen was closed, so I just showered and went to bed with no dinner. Boo. Next time, I’ll make sure I have a few protein bars with me or an emergency cheese sandwich.

My Blade with the world’s tallest suspension bridge

In the morning, I woke up absolutely starving (seriously – they could have made a Christmas advert about sponsoring me for just £2 a month with Bob Geldof singing in the background) so I ate absolutely everything I could get my hands on. Of course, I was on the continent, so think more croissants and cold meat instead of bacon and eggs. Still, it was really nice and soon I was struggling to zip my leathers up  because I was so full.

Today was to be an exciting day – at the risk of sounding vain, I really wanted a picture of me riding across the Millau Viaduct as it’s the tallest suspension bridge in the world and looks incredible. So, before I left, I did some thinking about how to best achieve this, and, not having the money to hire a helicopter, I decided to try and find a local photographer. I found three online and approached them by email. One didn’t bother replying; the second said it was illegal to take photographs there without a special permit as it’s a national monument in a national park or something, and that no-one would be able to help me. The third one said, “Yeah, sounds like an awesome plan! I’d love to help and I’ll do it for free.” Amazing.

Riding across the incredible Millau viaduct

The plan was for me to head towards the bridge and meet him on the main road leading to it around midday. The photographer had enlisted his dad to help and he was going to sit on the back of his dad’s scooter and follow me across the bridge and hopefully get a cool shot. He’d explained we’d only get one run at it because there are cameras along the bridge and security posts at either end, so if we were spotted, we’d be in serious trouble. We couldn’t stop on the bridge either as there is no hard shoulder.

We were coordinating by text and the plan was to meet a few miles away and get some pictures on the road underneath the bridge before going for the crossing. The last message I’d had confirmed they’d be on the road I was riding along shortly, and I should just look out for them in a lay-by as I approached the bridge.

Unfortunately, a number of things happened in a very short space of time, ending up with me lying at the side of the road trapped under a Fireblade. I came around a fast, sweeping 4th-gear bend and there were some cars ahead of me but I could see a long way round the next bend and nothing was coming. So I pinned it and overtook them round the next bend. As I pulled back into my lane, I suddenly noticed two guys jumping around and waving at me from the side of the road. They had heard me coming and recognised me from my description (black bike, black & white leathers), but I hadn’t seen them until the last minute as the lay-by was obscured by a grassy bank. I made the decision to brake hard and pull over to the side of the road, rather than carrying on and finding somewhere to turn around.

Julien, the photographer, and his dad

This turned out to be a really stupid decision as there was some gravel at the edge of the road which I hadn’t seen and I locked up the front on it as I was braking quite hard. The front slid sideways and the bike went down, trapping my leg underneath it. So the first my professional photographer and his dad saw of the biker from England who had contracted them for a photoshoot over the next 4 hours was me screaming around a bend, pulling over, slamming on the brakes, skidding, and falling off my bike. Then they had to trot over and help pick the bike up off me. I have literally never felt so stupid! Luckily there was very little damage other than a few minor scuffs – ASV lever, bar end, upper fairing panel and footpeg.

Photos on the bridge

Obligatory wheelie across the tallest suspension bridge in the world

Embarrassing introduction over with (during which I had to explain a million times that I wasn’t hurt) (apart from my pride!), they led me along the road and we were soon on the valley floor underneath the bridge. We shot a few photos there and then had to ride quite far to get onto the main road which crosses the bridge. We pulled over before we got there and the photographer explained they’d just ride along the bridge at a steady speed so I should vary mine to get some shots from behind and in front. The light was a bit strange because it was grey and overcast but still very bright, hence the over-exposure of the sky in one of the shots.

Off we went and rode across the incredible suspension bridge. It’s hard to describe how impressive it is and it was great to ride across. It’s so tall, the suspension pillars towering above you, and the valley floor is so far below that you can see for miles. Julian, the photographer, was great, twisting around on the pillion seat of his dad’s scooter to get a bunch of photos of me. After we crossed the bridge, I followed them to the nearby town where they lived for a coffee. He explained it would take him about a week to get the pics over to me because he was booked solid for the next 4 days but would post me a disc asap. He’d said he was happy not to charge me for his time because he was a biker himself and I’d said he could use the pics he took for his promotional purposes, but I still gave him €100 as a thank you for his and his dad’s time, petrol, etc.

After that, we said our goodbyes and I continued on through the national park. The roads had been fantastic all day, and they were equally fantastic as I headed for Villeneave-les-Avignon. I reached here in the early evening and pulled up outside a gorgeous old hotel. I originally decided to find somewhere else to stay as it was way over the €60 budget I’d roughly set for accommodation each night. Villeneuve-les-Avignon is just over the river from Avignon, and the sat nav showed there were loads of places there to try but after riding around for half an hour and not finding anywhere else I liked the look of, I decided to suck it up and pay the €150 for the first place.

Villeneuve is a gorgeous place, very olde worlde with classic, medieval architecture. Just over the road from where I was staying was a restaurant with all its tables on the cobbled area outside. It was pretty busy but the menu looked great, so I went there for dinner. I had another amazing steak with some equally amazing red wine. After dinner, I went for a walk around for a while and then finally headed to bed, aching and smiling after an eventful day.

Coming up in part 3:

A selection of shots of the best bikes at the London Bike Show. All photos © Superbike Freaks