After months and months of hard work finding a suitable location and fitting it out appropriately, the first Kushitani UK store opened in Boston, Lincolnshire, on Friday 25th August 2017.

Jonny King, MD of Kushitani UK, invited Superbike Freaks to attend the launch along with a few other press people from the mags and what-not and, all in all, it was a brilliant day!

Normally when I’m heading up to Lincolnshire, it’s to do a Cadwell trackday so it was a bit weird to be travelling up on a train, but the mechanics of a 300-mile round-trip with camera equipment made that the best option for me. As it happens, my train was 15 minutes late arriving into Grantham meaning I missed my connecting train to Boston by 5 minutes so I complained to the Virgin Trains office & they paid for a taxi to take me the rest of the way – great customer service by a train company (I’m used to the locomotive hell that is SWT… say no more).

Various leather suits from early examples to newer ones

The launch was scheduled to kick off early afternoon with plenty of time to view the impressive range of gear in stock, mingle, and enjoy far too many burgers from the excellent barbeque. This was set up in a tent outside and being valiantly manned by an extremely warm-looking man, brandishing all manner of tongs and spatulas, who spent hours standing over a massive grill cooking all afternoon on what was an extremely hot day.

Having travelled all the way from the Hamamatsu head quarters in Japan especially for the UK store launch was the new CEO and President of the company himself, Junichi (June) Kushitani, the grandson of the founder. June was accompanied by his right-hand lady, Fumiko Okada, who is responsible for Kushitani’s overseas operations.

I had the opportunity to chat to both of them and the commitment and passion they have for the brand is amazing. They were kind enough to invite me for a tour of the head quarters and factory if ever I’m in Japan, so I’m planning on making that happen when I visit there in a couple of years.

As well as little old me from SBF, there were a number of other (actual proper!) journalists there too from some of the mags. Sir Alan Cathcart, aka the world’s most successful motorcycle journalist, and also an ex-racer, current European Correspondent for Motorcyclist magazine and the Guild of Motoring Writers’ Journalist of the Year in 2009, also attended the event. Obviously, I was completely out of my depth but also honoured to have been invited amongst such well-respected global industry figures.

I arrived fairly early so spent some time browing the range of stock in the store and chatting with Jonny. He had managed to get hold of some historic Kushitani memorabilia to put on display, including one of Alan’s early race suits which had seen some serious crashes in its time and held up admirably.

The diversity of Kushitani’s products is really interesting. They cater for all types of bikers with their range, from racers and sportsbike riders to the urban biker to the all-weather tourer. They’ve put a huge amount of thought into what the modern biker demands from his or her kit and produced a selection of equipement to satisfy them all.

We have previously examined the Kushitani method of making leathers and reported on this extensively in our Leathers article but it’s worth reiterating how instrumental Kushitani has been in the evolution of the safety features and technology we take for granted in motorcycle gear these days.

For instance, they were the first brand to fit knee-sliders and knee, shoulder and elbow armour as standard in their suits. They also have a specially bred type of cattle in Japan which they use for leather as it’s incredibly durable.

Kushitani offers a range of custom suits in six different styles and all are made in the same way and by the same people who make the suits for their racers, so the suit and gloves you buy will be no different to Aoyama’s.

Click here to see the range of custom suits they offer.

As well as the race-oriented gear, Kushitani has also focused heavily on the urban rider. They have designed and manufactured a range of gloves, waterproof street jackets, footwear, and accessories to suit all types of riding. Included in the accessory range is a flight case to transport all your gear abroad and various styles of bags (including ones you can strap to your legs which are all the rage on the continent) for when taking a backpack is impractical.

They have also brought out a range of jeans which look like normal jeans but are in fact made out of leather, therefore offering much better protection. Continuing to innovate, they now offer armour which can be strapped on to your legs and arms for protection when riding and then removed when off the bike for convenience.

As with all Kushitani gear, the quality is fantastic and the design is simply beautiful. There is no escaping the fact that Kushitani is an iconic and high-quality brand and their new products showcase this perfectly.

Around mid-afternoon, it was announced that is was time for the official launch so we all packed into the store to listen to a thoroughly entertaining speech by Alan, a lifelong Kushitani brand ambassador. 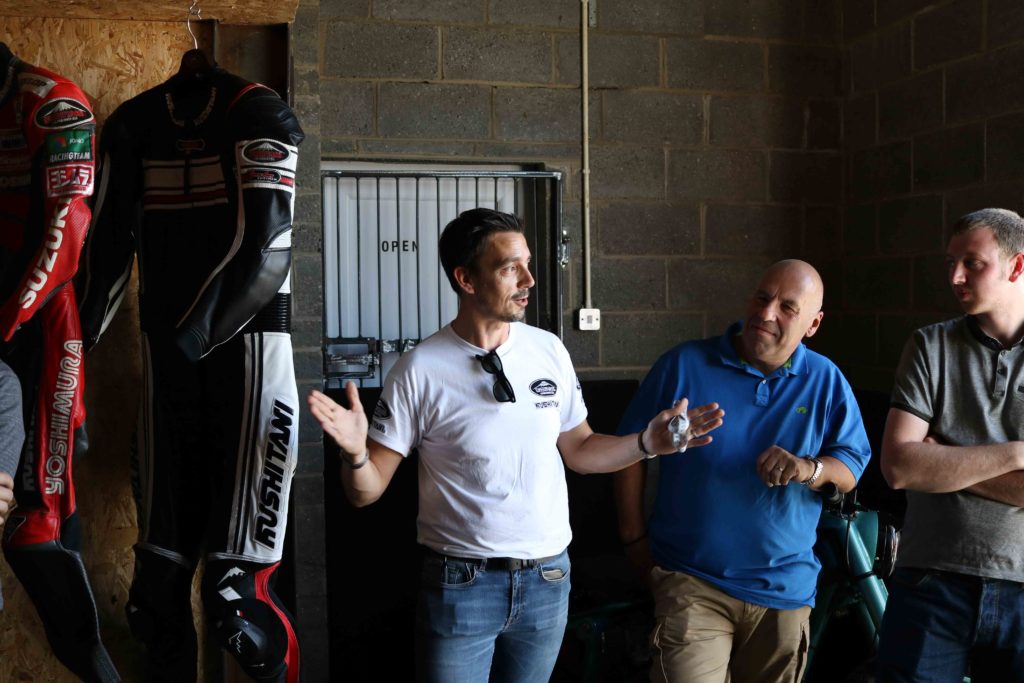 Jonny, MD of Kushitani UK, speaking at the launch

Alan regaled us with stories of his association with Kushitani over the years which started in around 1984 after a crash at the Bol d’Or whilst wearing gear from another manufacturer. Alan, and about a dozen other riders, all went down on oil at the end of the mile-long Mistral Straight at Paul Ricard, turning into one of the fastest corners in the world. Alan’s hand was caught under the bike which resulted in parts of some of his fingers being ground away. Once it became clear that he would be able to ride again, Alan resolved to only ever wear quality gear from then on and has worn Kushitani ever since through choice, without ever being paid to do so.

After Alan spoke, we heard from Fumiko and June who expressed their delight at the partnership with Jonny and the subsequent opening of the UK store. Then it was Jonny’s turn to step up, describing the passion he has for the brand and his pride at being a part of it.

After that, we all spent a few hours swapping biking stories, eating the fantastic burgers from the barbeque and sitting around in the sun looking at the cool bikes Jonny had on display. All in all, I’m delighted to have been invited to be a part of such a fantastic day!

Pics taken at the Motorcycle Live bike show at the NEC, November 2015.