I was considering a new bike earlier this year (a plan which is now shelved for a while) and organised a few test rides accordingly. I’ve always loved the RSV4 but hadn’t ridden one before until I saw the Factory version in stock half an hour from me at InMoto in Sutton and they were kind enough to let me take their demonstrator out.

I actually rode this RSV4 twice as the first time I took it out, I went the wrong way and spent 2 hours crawling through horrible south London traffic in the rain on what is essentially a WSB bike with lights… which wasn’t ideal. Clearly, a bike like this is designed for riding through the Black Forest or hammering round Mugello – I seriously doubt a sodden, grey Croydon was even considered by the designers and engineers involved in the production of the RSV4. 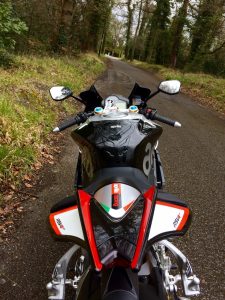 The second attempt I took this out was much more successful – I turned the opposite way out of the dealership and was soon passing Biggin Hill on the way to the A25 and some less congested roads. This time it was dry but cold and I had a really great, two hour ride on it.

The first thing I noticed about this bike is just how small it is – it’s really compact and slender, like a 250. Ok, maybe a 250 on steroids. The next thing I noticed when I got on was how tall it feels. The seat is only about 3cm taller than my own bike, but it made a big difference and, in leathers, I was up on my toes every time I stopped. I felt quite precarious, “please don’t drop it, please don’t drop it” on repeat in my head every time I tottered up to traffic lights.

As soon as I got out of heavy traffic, at the first opportunity, I pinned it and was amazed at how smooth it was and yet absurdly fast. It just pulls so cleanly and instantly, the throttle is incredibly responsive. That acceleration became fairly addictive so I spent a quite a while just slowing down and then nailing it over and over. The V4 growl is fantastic although muffled and would clearly be infinitely approved with an after-market exhaust.

The RSV4 is everything I was expecting it to be – exotic, ridiculously fast, gorgeous – but more than that, it is the lightest-steering bike I’ve ever ridden. It has lightweight forged aluminium wheels which have a massive impact on the handling as any weight-saving to the unsprung, rotating mass of a bike has a much larger effect on the handling than a much larger weight saving above the springs. It takes no effort to turn at all, as if it’s psychic and just goes where you want it to as soon as you think of changing direction.

The Aprilia comes with all the bells and whistles you’d expect for 2016 – Ohlins adjustable suspension, Brembo brakes (which are fantastic), ABS, launch/traction/wheelie control, a quickshifter (which was fine but noticeable less slick the the BMW’s) and three riding modes – Sport, Track and Race. I played around with the different modes (by “played around”, I mean I whacked it in Track mode immediately and Race as soon as I got out of town a bit) but, because I was on a test ride, I didn’t turn down the traction control from the medium/high setting it was in when I got on it, and I couldn’t remember how to turn off the anti-wheelie. I do understand that 200bhp bikes need some electronics to help manage the power delivery but I prefer superbikes to have a bit of bite and feel like they’re trying to kill you a little bit when you crack open the throttle hard. With all the traction control and anti-wheelie, this did feel slightly tame so I really think it needs to be let off the leash a bit for it to have that slightly unpredictable, borderline psychotic feeling which I think makes superbikes so exciting.

Because I’m not a journalist for a glossy magazine, I wasn’t invited on the launch when these first came out and I’ll probably only get to ride one of these on a track when I buy my own… so I don’t claim to have test-ridden this to its limits or to have really pushed it. What I know, though, is that riding this bike definitely made me feel a bit special compared to every other bike I’ve ever ridden, including the S1000RR and 1199 Panigale. The finish is fantastic, the attention to detail is amazing; I love the shape of the tail unit with the pointy sharp bits. There’s just something about it… something that makes you pause and look back at it when you’re walking away for a little longer than you normally would.

For further information on the RSV4 or other Aprilias, Ducatis, KTMs or Kawasakis, contact Cristian at InMoto.

Over Easter weekend, while most people were doing DIY or running around the garden looking for hidden chocolate eggs (probably), SBF went to the south of ...